Deck it Out: Warning Signs of a Faulty Deck 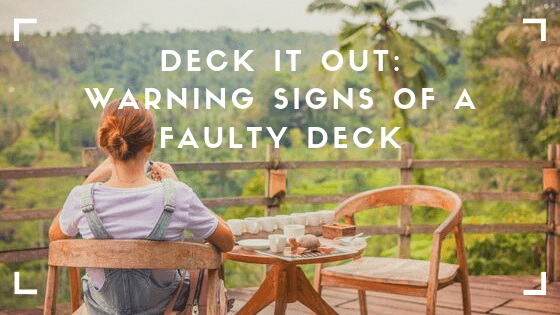 There’s nothing better than a home with a beautiful deck filled with rocking chairs and flowerpots. There is also nothing worse than a deck that could cave in at any moment. Whether it is due to age or poor construction, many decks are at risk making it increasingly important to know what to look for when performing your home inspection.

This issue is something that is often overlooked by both homeowners and inspectors. One of the limited studies done on deck collapses concluded that “224,000 people were injured nationally due to a deck or porch between 2003 and 2007. Of those injuries, 33,000 were a result of a structural failure or collapse”, according to the Consumer Product Safety Commission.

If these facts are concerning to you, here’s what to keep an eye out for when it comes to your deck!

Make homeowners’ decks somewhere they can spend happy hours, barbecues, and family time without the fear of an accident.

Back to Blog
There Is No Substitute For Hands-On Field Training. Contact Us Now!